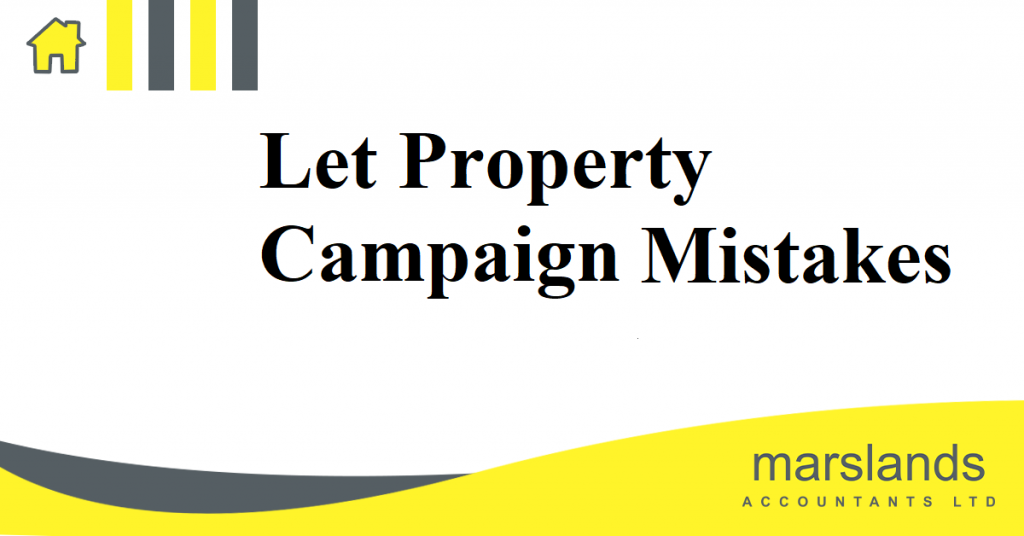 Cindy’s a lady who came to us two years ago now and she had a problem, well actually she had a couple of problems but the biggest problem she had is she’s had one of those horrible letters from HMRC saying we got you! They had caught her well and truly because she’d made quite a few different mistakes.

Her first mistake was that she had thought as a landlord that when she rented out the property that because the rent that she was paying to another landlord was actually more than the rent that she was receiving as a landlord, that she had no tax to pay. She hadn’t really thought at all that the fact that it was an income source but when she when any landlord receives any income for rent from somebody else whether it’s a family member or not that is taxable income. It doesn’t matter whether you make a profit or a loss it’s still taxable income.

The second mistake that Cindy made was that she decided to call HMRC and tell them about it because she found out that she should have been declaring her rental property. She rang up HMRC and told them that she hadn’t declared her property income. When HMRC asked when the income was from Cindy gave them a date that was just after the last 6th April knowing full well that it was not true. She knew that but she thought let’s get me in the system. It’s okay at least once I’m in the system it’ll all work out alright.

HMRC quite rightly registered her from the current tax year and just put her into the self-assessment system. A few months later HMRC added up the two different things and thought hold on a sec, you’ve had this property for 15 years. Sometimes people live in a property and then they rent out that’s not a problem you’re allowed to live in your own property. The problem is when you rent it out and Cindy had rented it out through an agent so HMRC could double check their records, yeah and they found out that Cindy hadn’t been renting it just from last year she’d been renting it for quite a few years now.

That’s when the enquiry division came into it. So the problem is when you get one of these HMRC letters from the enquiry division you really don’t want one honestly. They are not the best division to deal with and already you are on the back foot because they found you, so the penalties are going to be higher. Cindy thought she could get away with it really but she couldn’t. HMRC may take their time to catch people but they will catch them in the end please be assured they will.

The third mistake that Cindy made was that she gave us the figures for us to deal with and we submitted all those figures correctly as she provided us with and we saved her some more tax along the way with things that she hadn’t thought to claim as well and when the enquiry came back a few months later because the letters take a short time with HMRC enquiry division, she’d made a mistake. HMRC quite rightly asked for evidence of the income for a certain year from their agent that she was using and their figures didn’t agree. When you finally get around to submitting your tax return and your accounts please make sure everything’s right!

It really does matter because when you’re in an enquiry HMRC ask for more information about a lot of other things and that led to other things from there but that’s the bigger case study so I’ll talk to you about that another day. If you’re a landlord and 1. You don’t think you should be declaring your property, you do! 2. If you have found out you should be declaring your property please tell them from the right date. Get into the Let Property Campaign, it’s much better for you, not just the penalties but also the stress amount as well.

At Marslands we specialise in the Let Property Campaign. We specialise in helping landlords as well. If you’re a landlord and you think where do I go from here then please feel free to contact us.

On average we save landlords £6,000 and our best saving so far is over £200,000! It’s a lot of money that we can be helping you save. Yes you might have to pay us a fee but we earn it. That’s why we have a success guarantee so if we don’t save you more than what you pay us, you don’t pay us that much, simple!

If you’re a landlord looking to come clean then please feel free to contact Marslands. Use our website at marslands.co.uk or email us admin@marslands.co.uk or give us a call and we will help you on the next stage of your journey with the Let Property Campaign helping landlords one step at a time.